From now on, you can let your participants rank multiple options based on their preference or any other desired order.

Do you need to make a team decision quickly and democratically? Move ahead with a project and decide on the next steps? Or find out what topics interest your audience the most?

There’s no easier way to do this than with a ranking poll.

(By the way, would you rather watch a video? Head over here.)

How does a ranking poll work?

Create a poll question such as, “Which of the following is your most favorite? Rank these options according to your preference.”

Next, add the choices for your audience to rank.

When you’re ready, run the poll at your meeting.

What are the benefits of a ranking poll?

This poll is possibly our most democratic type yet. You’ll place the power of choice in people’s hands and their votes will create a clear top-down chart.

Here’s what you get from a ranking poll:

With a ranking poll, everyone has an equal say in the voting and can actively influence the ranking of each particular item. Think of a democratic election. The ranking poll will tell you exactly which item ended up in the first, second, or third place.

Making a collective decision through discussion can take hours. People talk over each other or don’t talk at all. With a ranking poll, you’ll speed up your decision making tenfold. Let people rank their choices and you’ll resolve the discussion instantly.

In a ranking poll, your audience’s votes aggregate into a top-down chart. This gives you a very detailed insight into people’s preferences: not only will you know which option won, but you’ll also know how popular/unpopular the rest of the options are.

Where can you use a ranking poll?

This type of poll will help you at practically any smaller-scale meeting:

Here are the top use cases where the ranking poll will come in handy:

Making a collective decision is often a lengthy, tedious process. Instead of long discussions that lead nowhere, put your considered options into a poll and let your meeting participants rank their top choices.

Whether it is the smallest kind of decision – such as, ‘On which day should we be having our weekly syncs?’ – or decisions at an executive level, a ranking poll will save you hours of time.

Imagine this: You’ve just run a successful brainstorming session and ended up with a dozen ideas for the next season. Now, you might need to prioritize them.

Gather all ideas, put them as options in a poll and let your teammates rank them.

You’ll get a clear chart of projects your team thinks have priority and you can subsequently plan the next steps.

You can use this tactic in a myriad of ways. Your product teams can use a ranking poll to determine which feature should be next in development. Your marketing team can rank different channels for allocating budgets, etc.

3. Narrow down topics for discussion

Find out which topics people find most relevant and have more productive conversations.

Put topics that you were about to cover during the meeting or training as poll options. Let your audience rank the topics in the order of how important they are to them. 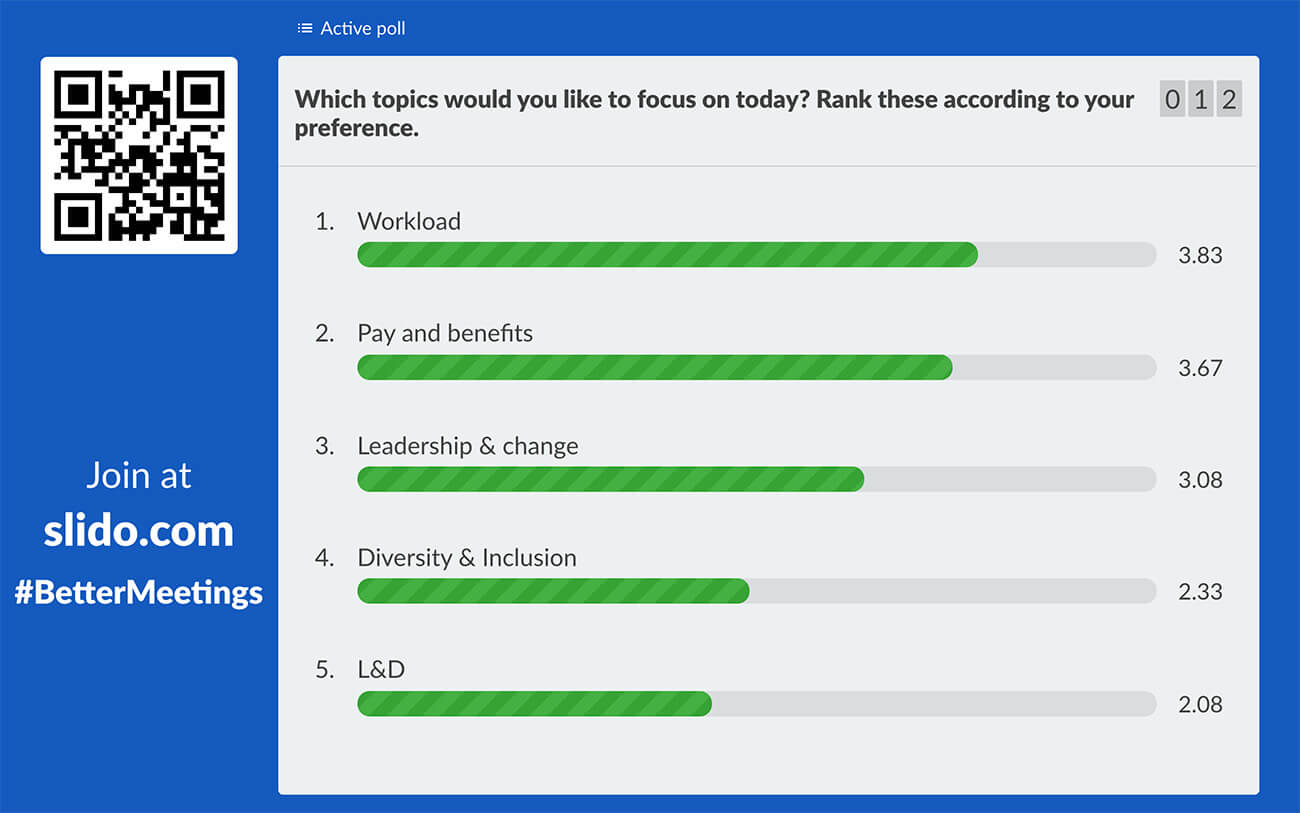 Here’s what one of our clients who’s responsible for training employees told us:

“As an educator, you’re often in the dark as to what your audience actually came to learn. Using a ranking poll allows me to get an in-depth insight into the topics my trainees care about so I can prioritize them and tailor the content of my presentation to my audience’s needs.”

You can use ranking polls effectively for feedback as well. For instance, during retrospectives, go deeper than just identifying what worked and what didn’t. Have your colleagues rank the concrete stages or parts of your project and identify your team’s strong suits and weak spots.

Or, after a training or a webinar, learn what your participants considered most useful, and what was less useful, so you can improve your session for the next time. For example, if you’ve discussed multiple topics, have your participants rank them based on which gave them the most value.

Read also: How To Run a Great Retrospective With a Large Remote Team

If you’re in need of a fun icebreaker for your meeting, have your colleagues rank their favorite movies, songs, meals – you name it. Just pick something fun that you can all talk about, add the options, and let your teammates rank them as they see fit.

You can then all share a laugh about how the results turned out and share some social time together.

Ready to try a ranking poll at your next meeting?

Above, we’ve shown you a few ways of how a ranking poll can turn your meeting or training around, make decisions more democratically, save time, and collect lots of invaluable insights from your team.

But the possibilities are endless. Play around with polls and find your own favorite use cases. We’ll be happy to help you out. 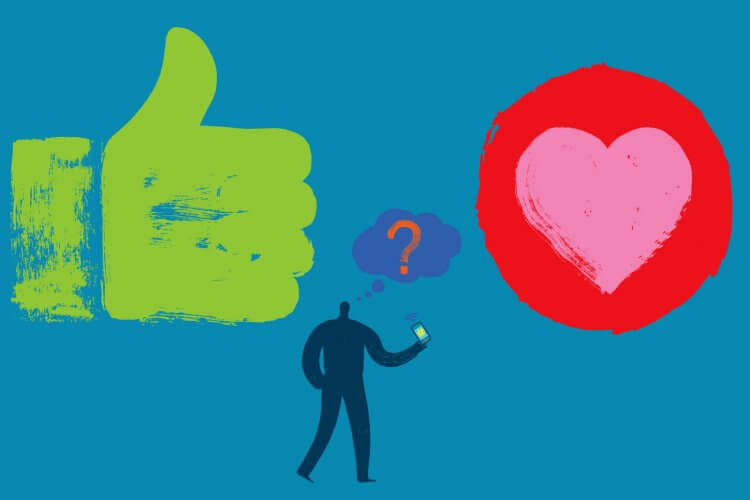 101 Would You Rather Questions Examples to Cheer Up Your Meetings

If you’ve got an upcoming meeting where you know you’ll need to break the ice, then asking your co-workers a... 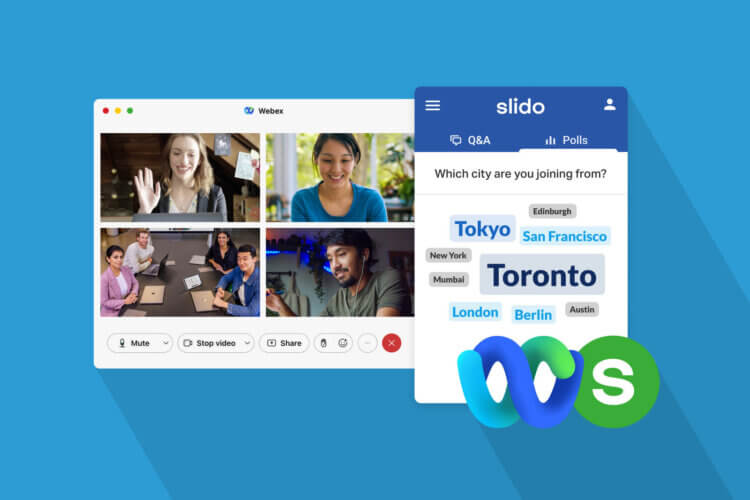 11 Tips for Using Slido in Your Webex Meetings

We have some great news for all the Webex users. You can now use Slido directly in your Webex Meetings.... 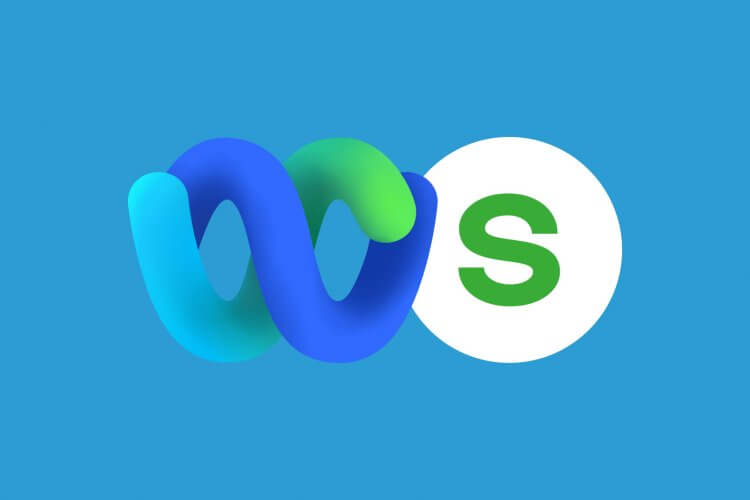 We’re excited to announce that as of today, we’re officially rolling out Slido’s integration with Webex Meetings. From now on,...